THE LATEST IN COMBATTING DISTRACTED DRIVING

by Raven Wells, News from The League

April is Distracted Driving Awareness Month, a month dedicated to thinking about the decisions we make while driving a car and ultimately, how those decisions affect the safety of ourselves and others.

If you are reading this, odds are these statistics hit a little too close to home. You’ve probably lived with, worked with or biked with someone who has been injured or killed by a driver looking down on their phone or reaching for something in their backseat. Maybe you have experienced a near-hit yourself while out for a ride.

WHAT IS DISTRACTED DRIVING?

Each and every type of distracted driving is dangerous and puts us further away from the vision of zero traffic injuries and fatalities on our nation’s roadways. 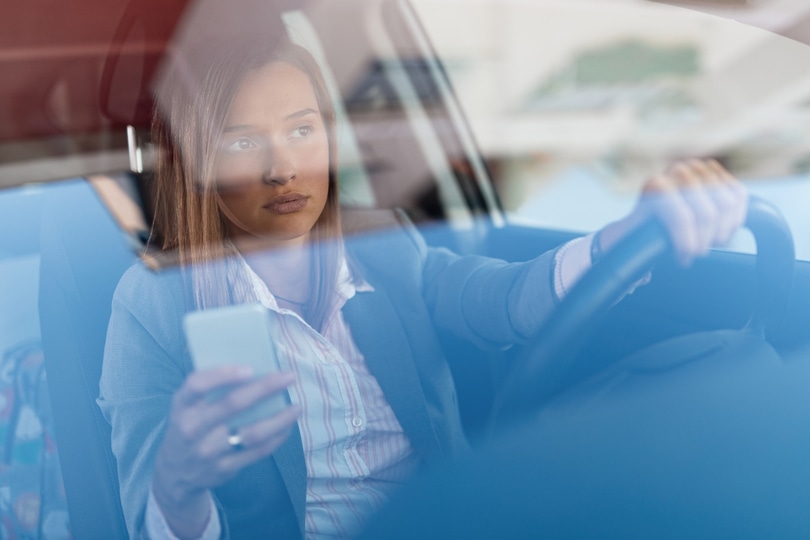 There are three words at the forefront in our call for safer roadways to national and state leaders: Safe System Approach.

As emphasized in the 2022 Benchmarking Bike Networks report, “The Safe System Approach proactively uses road design to change human behavior so that dangers in our transportation system are minimized and human errors are anticipated and their impact minimized.” By designing our roads with bicycle facilities in mind, like separated bike lanes, the dangers of human behavior, like distracted driving, can be minimized.

In terms of policy, data has shown that implementing state-wide laws that focus on prohibiting the use of a handheld device while driving and prohibiting texting does have an effect on reducing distracted driving. According to NHTSA, “Over the last nine years, the prevalence of drivers using hand-held cell phones at any given daylight moment has decreased from 5.2% of drivers in 2012 to 2.6% in 2020”.

Advocates for Highway and Auto Safety, who the League has partnered with on a variety of traffic safety issues, focuses on two distracted driving laws: 1) a graduated driver’s license cell phone restriction, and 2) an all-driver text messaging ban. In its 2022 roadmap, it found that 30 states had both laws, 17 states had one, and only 3 states had neither.

Many traffic safety advocates are hopeful that driver monitoring systems will eventually play a critical role in reducing distracted driving and its consequences. NHTSA is considering including driver monitoring systems to combat distraction in its New Car Assessment Program and the National Transportation Safety Board has included the technology in its Most Wanted List. NHTSA is also considering testing in-vehicle interfaces for how distracting they might be to operate while driving. The League will be commenting in support of these improvements in May.

At a more individual level, educating drivers on how their behavior impacts other road users and how to safely share the road with others is another step in reducing distracted driving. Bicycle Friendly Driver, an addition to the League’s Smart Cycling program and created by the City of Fort Collins, provides driver training on topics such as rules of the road for both drivers and bicyclists, how to avoid common crashes and what drivers can do to keep bicyclists safe.

In 2021, as part of the Bipartisan Infrastructure Law, Congress provided resources to add distracted driving awareness as part of driver’s license exams, an investment the League was excited to see.

WAYS TO COMBAT DISTRACTED DRIVING IN YOUR HOUSEHOLD

Organizations like the National Safety Council (NSC) can be helpful resources in keeping your friends and family educated about the dangers of distracted driving. You can find NSC’s promotional materials for distracted driving awareness here.

While downloading more apps on your phone might seem counterproductive, there are applications that may help you and others go distraction-free by monitoring and incentivizing hands-free driving through rewards and let’s face it — accountability.

For example, This App Saves Lives (TASL) rewards drivers who abstain from phone-based distracted driving. Drivers earn points for free for time spent driving undistracted and the points are redeemable for rewards from brands like Reebok, The Body Shop, Urban Outfitters, and more. Since young drivers represent a disproportionate percentage of distracted driving-related fatalities, TASL developed and launched a new parent portal feature that enables the parents of young drivers to monitor and reward their child’s safe driving behavior and prevent bad habits from forming.

This App Saves Lives partners with the League to offer a referral code for universities and businesses a part of the Bicycle Friendly America program that want to sign up to use the app.

While they also rely on follow-through and behavior change, pledges can be an easy way to spread awareness. Close out Distracted Driving Awareness Month by taking NSC’s Just Drive Pledge and committing to distraction-free driving here.